Governments are the primary entities responsible for fighting some of the world´s main problems: the abuse of human right abuses, poverty, hunger, global warming, gender inequality, for instance. However, the last decades witnessed the rise of a specific type of social actor, the non-profit, Non-Governmental Organizations (NGOs). As a consequence of the important humanitarian and ecological works developed by some NGOs such as the Médecins Sans Frontières – Doctors Without Borders (MSF), The Greenpeace, and the World Wide Fund for Nature (WWF), this kind of organization became important elements of the global political, social, economic, and business environment and raised the attention not only of the general media but also of the academic community around the world. In their goal of advancing specific causes, NGOs had to start local operations globally, therefore, to become international entities. The goal of this short article is to present how non-governmental organizations impact countries around the world.

While some NGOs are devoted to combating human rights abuses and to promote democracy and freedom of speech, others deal with issues that are not directly connected to local politics but are often results of ineffective actions taken or neglected by the government. Therefore, these non-governmental organizations address governmental failures. However, in some cases it is not easy to determine whether a specific issue or a problem is a result of a governmental failure; sometimes the inefficiencies are caused by market failures. Poverty, lack of affordable housing, and accessible health care are good examples of major socio-economic problems that could be caused by inefficient markets.

How do NGOs get their job done?

There are two main types of activities performed by NGOs: Advocacy and Service. On the one hand, Advocacy NGOs target to shape social, economic or political system by the raise of a social awareness of an issue [1] through lobbying, preparation of research and reports, serving as experts in their causes, holding conferences, exposing actions (and lack of them) of Government and Business sectors, and disseminating information. While their actions do not solve the problem directly, they mobilize resources to fight the market or governmental failures.

On the other hand, Service NGOs are focused on direct actions target to ease or permanently solve failures presented by market or governments. The organizations provide services and goods and take direct actions such as the provision of health care, immunization, the building of infrastructures such as hospitals and schools. They allocate their own resources while the search for support from countries, business and governments.

Sometimes a very thin line separates the operational mode of NGOs because many of them engage in both types of activities as both are needed to solve the very same issue. Most of them lean toward one type of activities or the other.

NGOs are important actors on the global socio-economic stage but for decades they were the weakest of the three sectors (government and the private sector being the first two). In many developing countries they act as agents of the state, performing functions that were once reserved solely for local governments, such as education, health care and banking [2]. And even in the private sector, NGOs are gaining more and more power. Many major corporations like Shell and Nike have changed their business practices in response to NGO activism. In other words, non-governmental organizations either go where the free market has failed or push corporations to go where they have avoided going. However, there is a fundamental question about non-governmental organizations: How NGOs go international? More precisely, this article focuses on the relationship between the types of activity these organizations conduct (either Service or Advocacy) and the geographical direction of its international expansion. In order to answer the above-mentioned question, a typology of international NGOs is defined, and corresponding internationalization patterns are discussed. 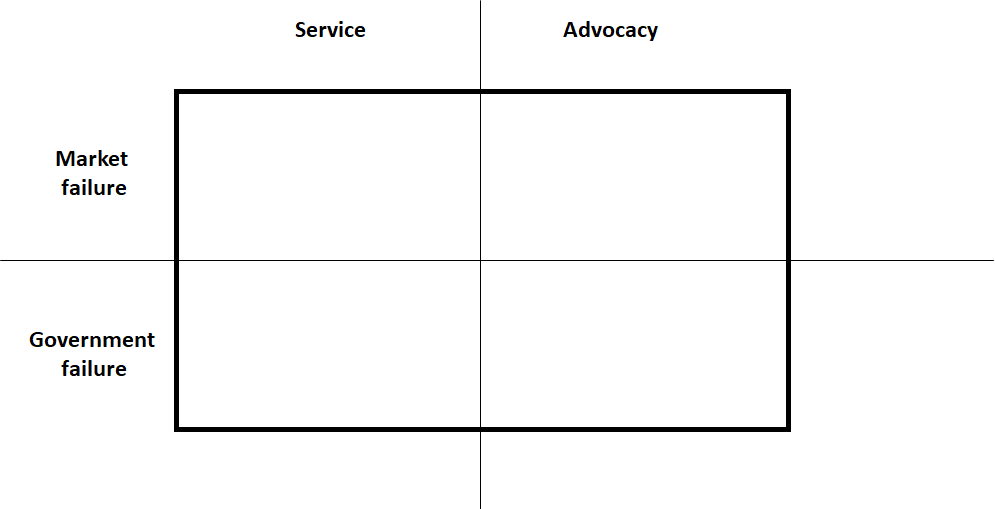 The figure above presents a simple two-by-two matrix with causes of the problem the NGO is addressing and type of activities it is engaged in. As a result, four archetypes of international non-governmental organizations can be distinguished. The first type is an organization that engages in direct political activism, addressing governmental failure in direct actions. Some experts [3] believe Amnesty International is an excellent example of this type of international NGO. On the other hand, Human Rights Watch, also an organization engaged in political affairs, is an example of NGO focused on international advocacy, thus falling into the down right corner of the matrix. Oxfam and CARE fall into the upper left corner of the matrix as they actively combat poverty in a number of countries. Although both organizations promote a specific social agenda and often blame political leaders for their inaction, their main goal is to bring relief to those in need. World Wide Fund for Nature is an example of an organization engaged in advocacy in favour of environmental protection, thus represents the upper right corner of the matrix.

Due to the four typologies of NGOs, there are four propositions about the interrelationship of the type of activities and the type of market failures NGOs address that need to be tested in specific research:

Proposition #1: Non-governmental organizations actively addressing governmental failures will not go to the areas most affected by the problem but will remain in geographical proximity.

Proposition 2. Non-governmental organizations engaged in advocacy against governmental failures will not go to the areas most affected by the problem but will move closer to (potential) sources of political and monetary support.

Proposition 3. Non-governmental organizations actively addressing market failures will go to the areas most affected by the problem.

Proposition 4. Non-governmental organizations engaged in advocacy against market failures will be physically present both in the areas most affected by the problem and close to sources of potential support.

There is little doubt that non-governmental organizations play an important role in solving some of the world’s most severe problems. NGOs may differ in terms of their activities, scope and internationalization strategy, but they all pursue activities to relieve suffering, promote the interests of the poor, protect the environment, provide basic social services, or undertake community development and thus are critical elements of the global socio-economic landscape. Their role has been recognized and researched by political and social scientists, who focus on the impact that a non-governmental organization may have on the local community, the state and other partners, whereas organizational behaviour and management scholars have focused on organizational structures. As the government and market failures spread over the globe and problematic issues become more and more entangled with each other, many non-governmental organizations have grown and spread geographically. However, there is relatively little literature on how and why they grow internationally. This article is only an initial inquiry but hopefully will catalyze international business and strategic management research in this area.

A full-time professor at EGADE Business School, Prof Szymansky is responsible for research and executive education at senior levels. Dr Szymanski’s research is focused in the areas of international business knowledge, strategic management and global leadership, with a special interest in topics such as biculturalism, intercultural administration and diversity and performance strategies. He has co-authored several texts, including: “Embracing Organizational Trauma: Three Short Case Studies Illustrating Positive Effects of (Near) Death Experiences on Organizational Culture”, “Understanding Multiculturals as Ethical Global Leaders” and “The Subprime Crisis: Economic Consequences of emotion-driven actions “.

[2] Szymanski, M. To Boldly Go Where No Government and No Corporation Have Gone Before. Academy of International Business Congress, 2016